As we kick off the rebranded HR CoP newsletter, we are pleased to feature an overview of the history of human resources at UW–Madison, as recalled by Carla Raatz.

Carla was the first Director of the Office of Human Resources (OHR)—a role in which she served for 21 years. She retired as Director in 2009.  (Bob Lavigna replaced her as the OHR Director.)  After a break she was asked to return to assume the HRS Site Lead role for UW–Madison and later moved into the HRS security role until June 2022. She’s been sorting through her personal files and calling up memories from 57-years at UW–Madison.

We were pleased to have this opportunity to talk with Carla—her stories are delightful and occasionally astonishing.

As a preface to what follows, Carla wanted to be clear that these are her recollections “to the best of [her] memory.”

What is the history of human resources and your roles at UW–Madison?

Human resources was initially called “personnel.” At UW–Madison, the processing of personnel actions was very decentralized—and limited in scope. Prior to 1965 (date unknown), the first official personnel office on campus was the Classified Personnel Office. This office worked with the State Department of Employment Relations (DER) on state civil service hires and reclassifications for classified staff, now referred to as university staff.

At the same time, an administrative office in Bascom was responsible for reviewing unclassified personnel actions. The employment types included academic staff initially; faculty, graduate assistants, and post docs were added later. The name of Academic Personnel Office (APO) was created around 1975, and I was appointed the first Director in 1980.

In July 1988, the Office of Human Resources (OHR) was created, and I was appointed as its first Director. At that time three offices were brought together:

In 1996, UW Hospital became a public authority and was no longer part of UW–Madison.

Vice Chancellor Darrell Bazzell decided to move Benefits Services and the A.W. Peterson Payroll Processing Center (systemwide), supervised by Richard Laufenberg, from the Business Services unit to OHR in October 2006. Since the A.W. Peterson Building was being demolished in 2007, the  benefits and payroll staff moved to 21 N. Park Street. My staff of 30 had increased to 100 over a short period of time!

In 2007, staff from Bascom also moved to 21 N. Park Street. The payroll and benefits functions, including the Call Center, served over 40,000 faculty, staff, and student workers from all UW campuses. These functions were the responsibility of the Service Center—now reporting to me in OHR—along with CPO, APO and OHRD.

In July 2008, the Employee Assistance Office was created and joined OHR.

In December 2013, UW System assumed responsibility for the Service Center.

After I retired in 2009 as Director of OHR, Wisconsin Act 32 was passed as part of the 2011-13 state biennial budget. This meant that UW–Madison could create its own human resources system.

Initially, there were two systems on UW–Madison’s campus—

Having two systems adds complexity, creates confusion for employees, and contributes to a sense of hierarchy and inequality among employees.” (HR Design Strategic Plan, p.5)

The mission of HR Design, which was implemented in 2015, was not seen as an end but rather as a means to UW–Madison’s research, teaching, and public service missions.

How did you get your start at the university—and what were your early impressions?

I grew up on a farm about 20 miles from Madison and went to a one-room school through 5th grade then a three-room school prior to attending Mount Horeb High School. After a year at UW–Stevens Point (where I ran out of money), interviewing for a job at UW–Madison was a bit scary. I was unfamiliar with the structure of the university—I didn’t know there was a Chancellor, Vice Chancellor (now Provost), or schools and colleges.

I was offered the Typist 2 position by Professor Ray Herb during the interview and began my career in June 1965 in a small department, Nuclear Physics. I was given a wide range of responsibilities, including payroll, budget, purchasing, plus collecting personal radiation monitoring badges.

The five faculty members were very helpful.  One even went with me to Accounting Services so together we learned how to read the budget control sheets.

I also helped grad students by typing their thesis papers for the Graduate School. If you made an error, you had to retype an entire page! These were complicated papers with many Greek/mathematical symbols requiring a typewriter with interchangeable keys. This typewriter had individual keys with a hook at one end, a thin metal bar, and symbol on the other end.  Each bar with the letter/symbol pops up when you hit a key and had to be changed (possibly multiple times) when there was a formula. The old Underwood typewriters had keys like this but were not interchangeable, and the more commonly used Selectric Typewriter with these symbols were not yet available.

On August 24, 1970, during the Vietnam War, Sterling Hall (where my office was located on the first floor) was bombed during the middle of the night. The sound of the bomb actually woke me up in my home in Middleton. I didn’t watch the news before coming to work and arrived to discover that everything was roped off. I had to get in to retrieve materials for a national conference. I remember standing in the hallway outside my office and looking down at the destruction of the research experiments and papers in the basement labs. Sadly, some students never completed their masters or PhDs. After the bombing, we could walk Bascom Hill again—no more protests, tear gas, and National Guard.

You were ultimately UW–Madison’s first central HR director. Can you describe how you moved into HR and the impacts of the technology changes.

My entry into personnel/human resources was in October 1971 when I moved to the L&S Dean’s Office where I was responsible for reviewing the L&S departments’ classified personnel action forms, transferring the information to payroll check sheets, plus monitoring their FTEs and salary budgets. Everything was on paper. Payrolls were processed using IBM cards.

In the early 70’s I got my first computer, a Wang ‘green screen’ computer.

In February 1975, I moved to the Classified Personnel Office where I was a personnel technician and then a personnel manager. I was responsible for classified reclassifications. I visited and interviewed employees across campus before either approving or submitting my recommendation to DER for their approval.

One of the old-time employees, Bob Brigham, in the Classified Personnel Office, told me that he actually handwrote the checks for all of the employees at UW–Madison in his younger days while at the UW.

In September 1975, Assistant Chancellor Cyrena Pondrom brought me to Bascom Hall initially to assist with reviewing Personnel Action Forms for all of campus. The checklist we used for PAFs is below:

Also, during this time, the Department of Labor audited the UW on our personnel procedures.  To avoid losing any federal funding, we had to start requiring open recruitment (PVLs) for academic staff (later it was expanded to cover faculty) with centralized review (see below):

In January 1980, we only had one shared computer in APO used for appointment-related inquiries and verifications when reviewing Personnel Action Forms.  An additional computer and printer were requested from DoIT for processing PVLs.

In 1980 Steve Lund and Emuye Asfaw were hired for the Academic Staff Review. They spent a year or more evaluating academic staff job descriptions using a point system that was an effort to address comparable worth and salary inequities. Later the UW contracted with Hayes/Hill, an outside consultant, to review all our titles, position descriptions, etc. They created a framework for assigning consistent titles throughout UW System.

On June 24, 1986, the Joint Committee on Employment Relations (JCOER) approved the UW System implementation of the academic staff categorization structure.  The current Title and Total Compensation (TTC) study was the first title study of its kind in over 30 years.

The diagram below shows the manual process that was primarily paper driven in 1983: 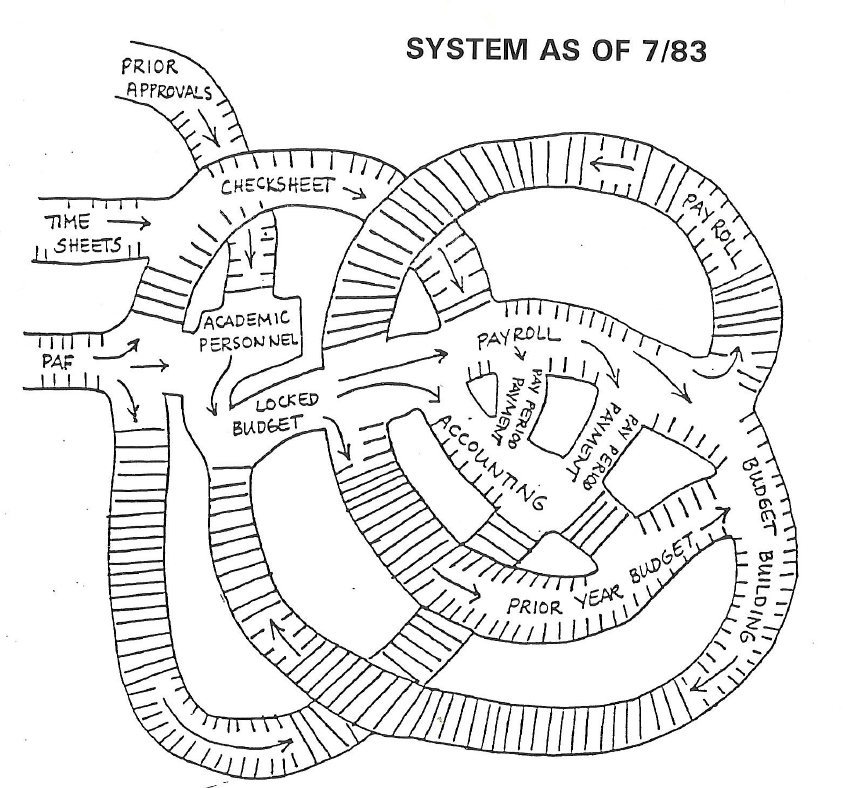 Working with DoIT, we developed our first electronic system—Integrated Appointment Data System (IADS)—which went live in 1989. The goal of IADS was to streamline as reflected in the Proposed System diagram: 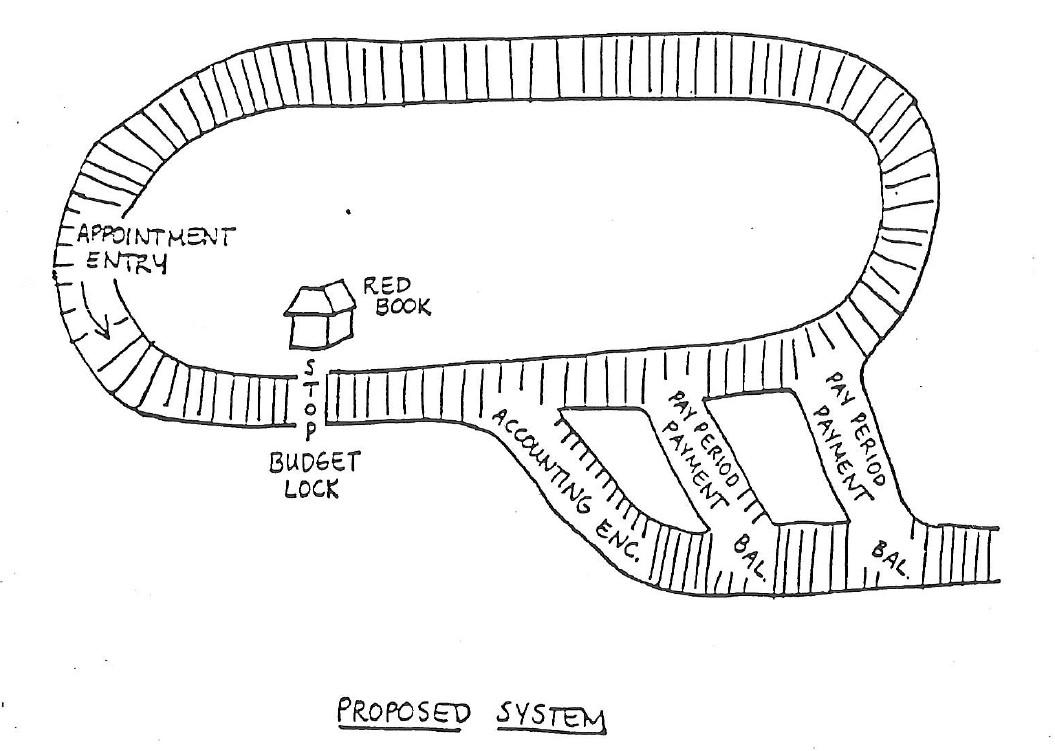 A sample of the IADS “Add Transactions” is pictured below: 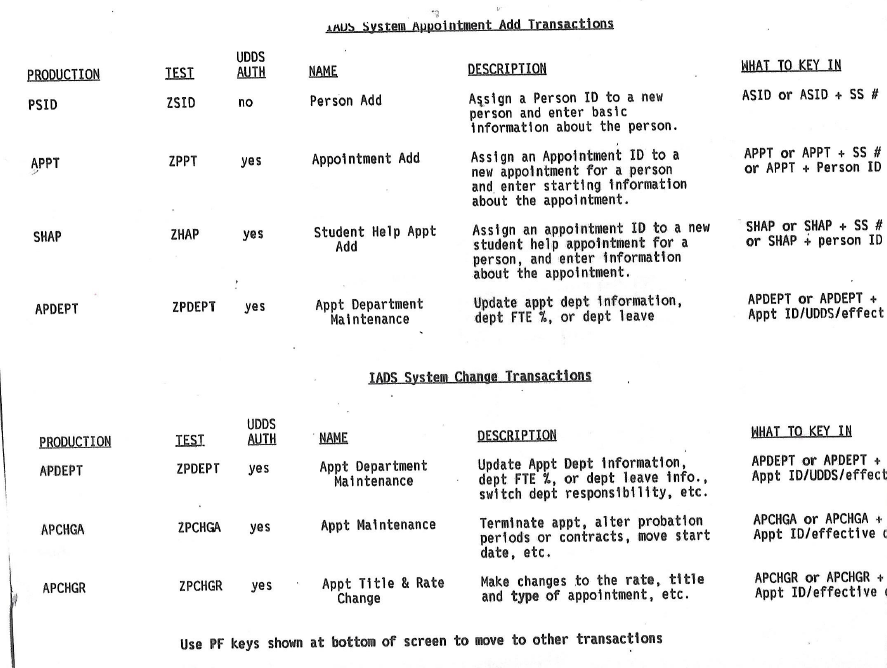 IADS meant we shifted from doing things mostly on paper to computer which increased our access to data.

In the midst of this, I was also involved in education and training.

In 1985, for example, I was able to launch the “Management Development Program” with Don Smith, President of UW System. Professor Joseph Kauffman took it over in 1986 and the name changed to “Administrative Development Program.” Professor Kauffman brought in speakers from governance, Wisconsin government, and the public.  They addressed the UW’s mission and our connections with their organizations. Today, we know it as the Kauffman Seminar.

In June 1990—when I still had two young rambunctious boys (ages eight and twelve) at home—Chancellor Donna Shalala ‘strongly’ encouraged me to attend a two-week Harvard Management Institute in Boston.  She even said I could take the boys with me and find childcare. The Institute was focused on how to work with and support faculty, etc. Although I enjoyed the experience, I discovered that I was more familiar with faculty governance than some of the instructors.

Between 2000 and 2005, the UW System Appointment, Payroll, Benefits System (APBS) project team attempted to implement Lawson Software. APBS was supposed to replace IADS. When it was determined implementation was still at least a year off, UW System Administration decided to stop the project and purchase PeopleSoft/Oracle (HRS). The cost associated with the APBS project was approximately $26 million. The goal for implementation of HRS was 2008—and 14 staff joined OHR to work on HRS in early 2008—but the go-live was delayed until February 2011 after I retired. I recall the cost for HRS was approximately $86 million.

What was the early mission and vision of HR on campus?

How many titles did you have over the course of your career at UW–Madison?

Between June 1965 and July 2009, I held thirteen different titles (both classified and unclassified) and four limited titles, including:

I’ve worked with nine different chancellors, plus four Assistant, Associate, and Vice Chancellors.  It’s been quite a ride!

What’s your favorite memory of your time in HR at UW?

Great staff—and mentors! The support I also had from my managers and supervisors was incredible. I never had a problem with getting support for any new initiatives.

When I was with APO in Bascom, we laughed all the time. We had a great time! We worked in close quarters and were always working on problems together. We were a much smaller and close-knit group in those days.

Speaking of Bascom, I gave birth to my two boys in 1978 and 1981. Walking up and down Bascom when I was nine-months pregnant was great exercise! My firstborn was 9 lbs. 2 oz. and born on a weekend after I’d worked that Friday. I also did have a problem once with the wet marble floors in Bascom when I fell and broke my kneecap!

What one piece of advice might you offer new HR professionals today?

I really enjoyed my numerous roles and responsibilities over the past 57 years at UW-Madison.  I hope that today’s HR professionals will feel as fulfilled as I was.  You should take on new, interesting challenges whenever they are presented and be sure you enjoy yourself.  It’s been a pleasure to look back.

To learn more about Carla and early HR at UW–Madison, check out UW–Madison’s Oral History Program’s interviews of Carla.